Cantec offers Analytic Systems Inverters. Analytic Systems manufactures DC to AC Pure Sinewave Inverters with inputs from 12 to 125 volts DC and outputs from 100 to 250 volts AC with frequencies from 50 to 400 Hz at power levels from 300 to 3600 watts.

Analytic Systems has been producing Pure Sinewave Inverters since 1994. Originally designed for running navigation computers on commercial and fishing vessels, the IPSi line has evolved into a range of digitally controlled models with continuous power outputs from 300 to 3600 watts.

All our inverters are Digital Signal Processor controlled for precise frequencies of either 50 or 60 Hz, the powerful high frequency MosFet switching network produces a low voltage AC waveform that is stepped up to either 110 or 220 VAC by a Toroidal transformer for the cleanest possible sine wave output with very low emi.

This technique produces a very clean AC waveform and reduces EMI to lower levels than achievable with other methods. Northrup Grumman evaluated inverters from all major manufacturers and chose the IPS series by Analytic Systems for their Army portable command centers for precisely this reason.

All the IPSi inverters are available in IP66 rated water-resistant or IP67 certified billet machined chassis for operation in rugged environments where exposure to spray or even total immersion is possible. 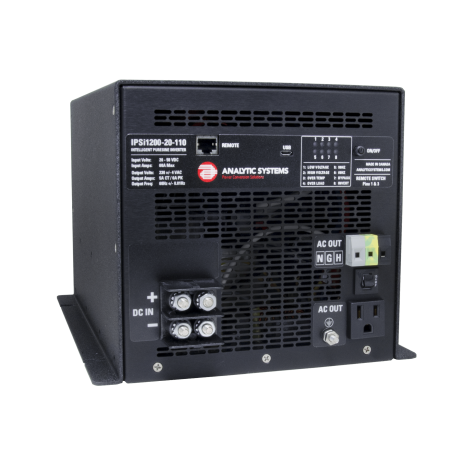